Big & Small traveled to the southern Italian region of Puglia to see if we could pull off the unthinkable—getting around without a car. Now, most people will tell you it’s damn near impossible to see this region without a good set of four wheels, but we like to prove most people wrong. We also hate driving.

So, we made our way to scenic beach towns via buses and bustling inland cities via trains. But to really get a sense of the charming, quiet countryside and stunning undeveloped coastline, we opted to try out Italy’s most beloved mode of transport—the scooter!

Enjoy our video above, and keep reading below for more info on all of the towns we visited on our epic scooter trip through Puglia, Italy.

We rented scooters in La Citta Bianca (the white town) of Ostuni from Road Runner Scooter Rent. Over six days, we took our humble 125cc scooters over 400 kilometers (roughly 250 miles). Because we were working with smaller scoots, we had to avoid the long stretch of highway along the coast—and, admittedly, that wasn’t always easy.

Despite a few problems along the way—play the video to see what happens!—we had a blast exploring the quaint villages speckled throughout the olive groves and vineyards. Each town has its own special air and aesthetic. Here are the spots we stopped in. 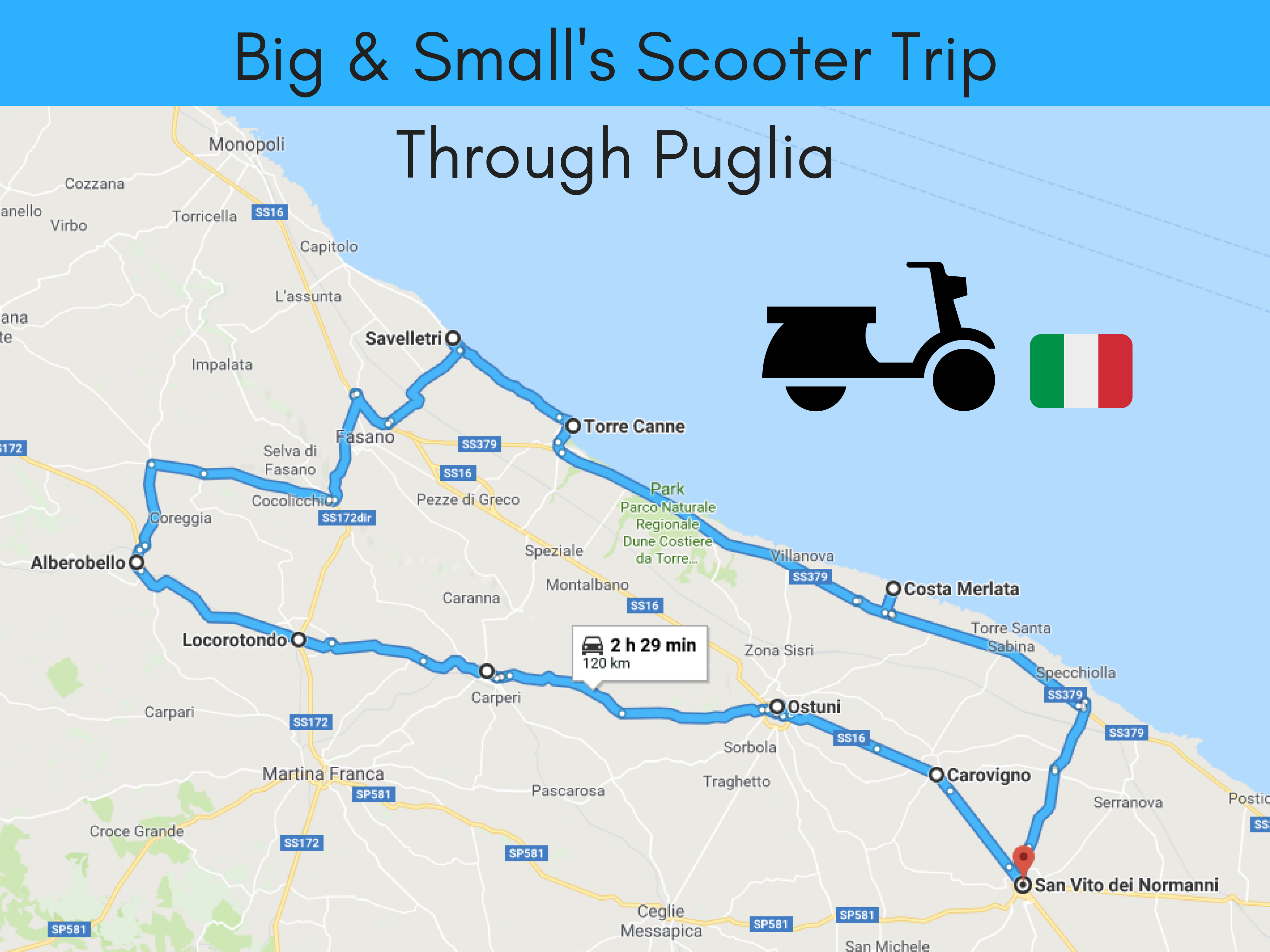 Of all the “white towns” in Puglia, this one is perhaps the most striking from afar, with its small, bleached buildings piled up on the hill. From the old town, you’ll find plenty of posh cafes and restaurants, and you can catch some spectacular views of the countryside as it blends into the Adriatic Sea. Ostuni is very touristic, which, for us, made it far less charming than other surrounding towns.

Heading deeper into the Valle d’Itria, you’ll start to see trulli dotting the roads—these are the enchanting little huts with conical roofs, and they’re truly adorable, though you’ll need to head to Alberobello (more info below) to get your fill of them. But a stop in Cisternino is just as much a treat, with its narrow, winding alleyways and great viewpoints of the sprawling countryside below.

Just west of Cisternino is another spectacular white town standing proud atop a hill, this one strategically framed within a circle (Lorocotondo means “round place”). Many people have claimed this one of the most beautiful villages in Italy, and though that would be a tough competition, we’re likely to agree. Walk along the circular edge, which is partly lined in vineyards or get lost among the elegant whitewashed buildings. We recommend this spot for an excellent lunch.

This is the fairytale-like home of the magical trulli with a dense concentration of over 1,500 of them. While their origins are a bit of a mystery, the oldest one dates back to the 14th century. While Alberobello is a hot tourist spot, it’s easy to see why, and it’s an absolute must when in Puglia. Walking among the trulli is like nothing you’ll ever experience. What stands out most are the symbols painted on the roofs, some “primitive” from ancient cults, some Christian, others based on “magic” or astrology. If Small had her way, she’d happily live in a trullo!

This small town just 20 km west of Brindisi was actually our home base. It’s probably the least touristy spot in the region, so you’ll definitely get a nice taste of the laidback, local flavor, and you’ll likely catch a live music show, which seems to happen nearly every night in this tiny town! Speaking of flavors, San Vito is home to the best restaurant in Puglia (and, boy, is that saying a lot!). Book a reservation at La Locanda di Nonna Mena for an authentic Puglian “slow food” meal using all local and seasonal ingredients. And enjoy it all at a reasonable price (we spent less than 30 euros for a lunch for two with two glasses of wine and dessert.

Between San Vito dei Normanni and Ostuni is another quiet, less-touristic small town, which is centered around the Dentice di Frasso Castle and more affordable and exceptional restaurants serving up plenty of the locally produced olive oil.

This is merely just a beach area, but the blues of the water here are so stunning it’s well worth a mention. I mean, look at this! Did you know Italy had such pristine beaches?

We also didn’t spend too much time in Torre Canne, but did scoot through it a few times and spotted some pretty incredible white sand beaches and quite a few pull-offs along the coast, where you could enjoy a little of the sea all to yourself. 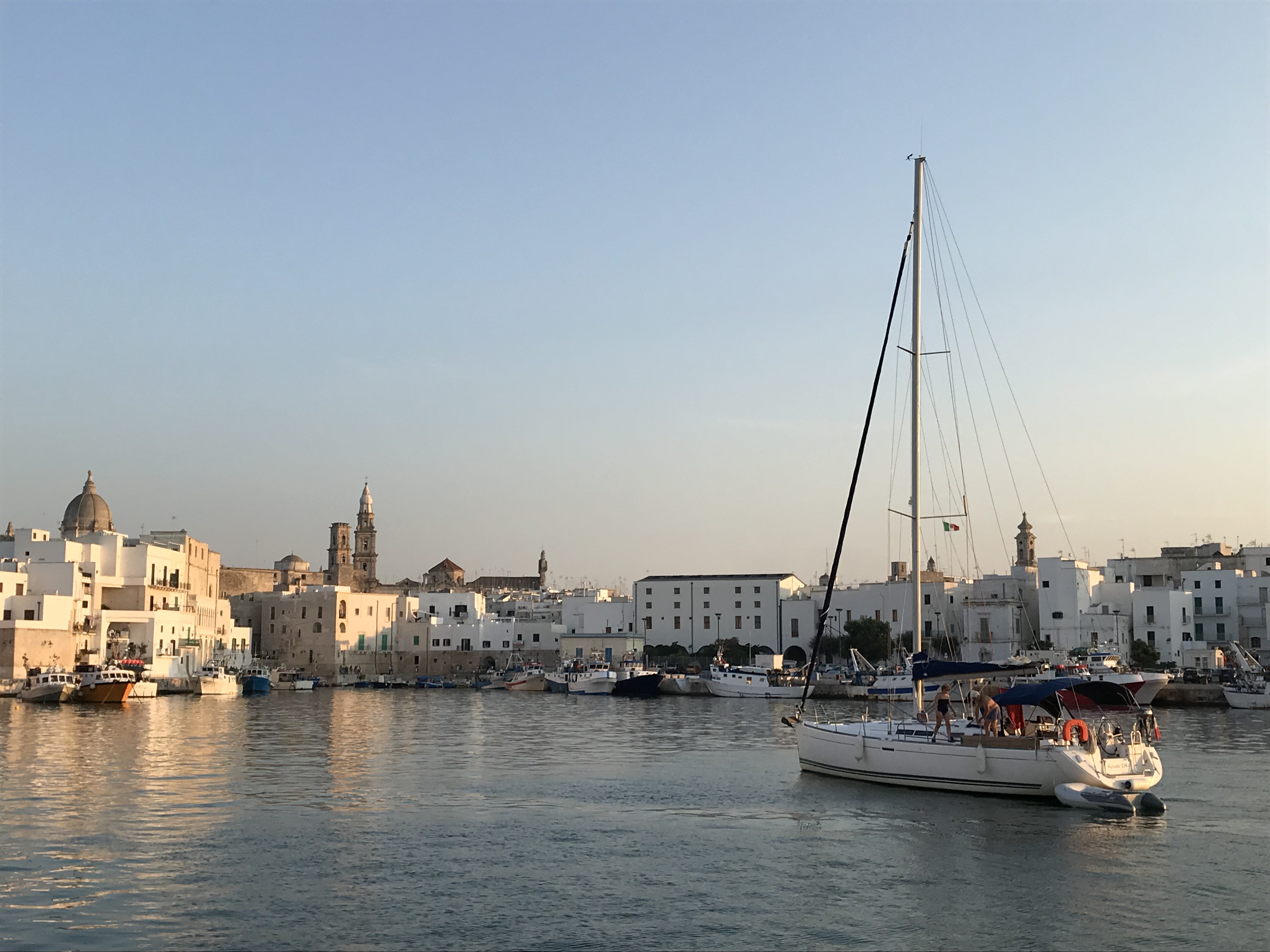 Our initial scooter goal was to make it all the way from San Vito dei Normanni to Monopoli via the coast, but as you’ll see in the video, we couldn’t quite make it happen! However, we did later make our way to this scenic coastal town, which is just a 30-minute train ride from Bari. Monopoli feels big in comparison with all its surrounding towns. As you make your way through the old town en route to the beach, you’ll pass by a lot of churches (yes, more than your average Italian town). Be sure to step into the main cathedral (Santa Maria della Madia), which is dedicated to the Virgin Mary, and the Church of Purgatory, where you’ll find a few mummified bodies of past church brethren. Once you reach the sea, we recommend walking along the exterior of the city wall, following the line of the coast and watching the yachts come in and out of the harbor.

We also had to hop on a train from Bari to get to this chic town, which hugs the Adriatic in one of the coast’s most dramatic displays. Going onto the water will grant you access to cool sea caves and grottoes, but if you’re more comfortable on land, Polignano a Mare has got one of the most picturesque beaches in all of Italy. Wind your way through the quaint alleyways—often packed with tourists, unfortunately—and then find some breathing room along the Roman bridge, where you can then make your way down to the cozy, crowded beach.

Check out the video above to follow our journey and catch a glimpse of each of these charming Italian towns. If you like the video, please hit the “thumbs up” button and subscribe to our Big & Small Travel YouTube channel!

6 thoughts on “The Best Way to See Puglia, Italy: On a Scooter!”