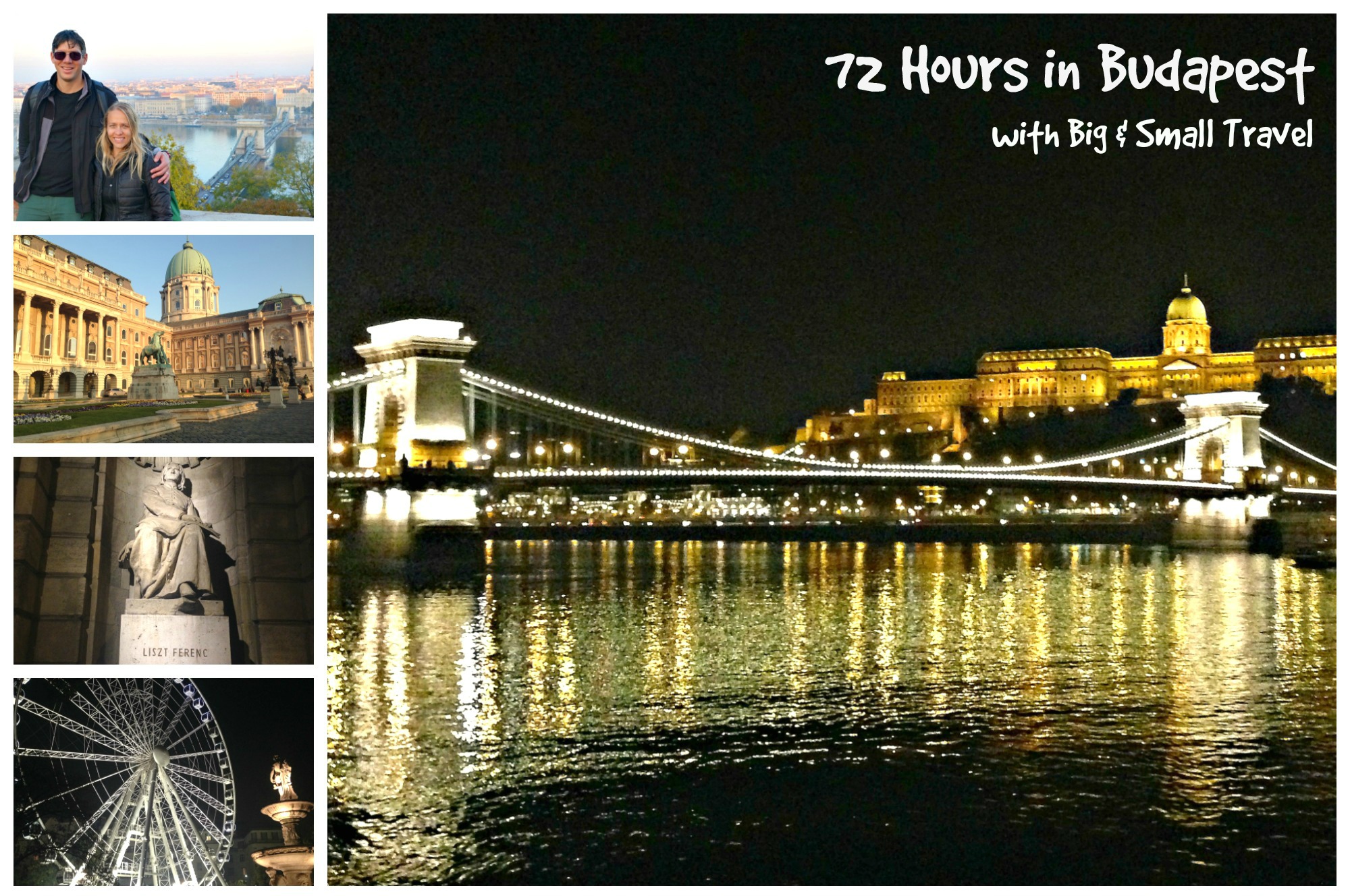 *DOWNLOAD A FREE 16-PAGE PDF OF THIS 3-DAY ITINERARY!*

This is a city that shines brilliantly through the darkness. It especially shimmers at night, with golden rays of light bouncing off the opulent palace in Buda and the commanding Parliament in Pest, setting the Danube River ablaze. The iconic Szechenyi Chain Bridge is in the center of it all, a symbol of both the union between Buda and Pest (the two cities were unified in 1873) and of the Hungarians’ determined resiliency (the bridge was rebuilt and reopened just four years after being destroyed in World War II).

But it’s not just this physical radiance that gives Budapest its distinctive glow. This is a city that doesn’t hide from its harrowing history; instead, it shines a big spotlight on it. And it’s a history so recent you can step right into its still smoldering remains, from the aptly named House of Terror to the many inventive ruin pubs dominating the nightlife. Everywhere you walk, there are constant reminders of a not-so-distant past, when the city lay in turmoil, and a secret police tormented citizens and tortured and killed any suspected anti-communist dissident.

Yet for every commemorative statue, museum, and remembrance plaque, there’s now a hip new club, a hot new restaurant (paleo and vegan options abound), or a chic new boutique quickly transforming Budapest into a city for the young, the vibrant, and the hopeful. It’s a fascinating juxtaposition, between a dark history and a luminous present, and it makes for a visit that is chock full of history, music, food, drinks, thermal waters, and riverfront strolls.

Here’s a loose itinerary for three action-packed days in the gorgeous capital of Hungary.

The New York Café is a richly ornate spot built in Italian Renaissance style in 1894. It once served as a popular meeting place for the literary crowd; it’s now a tourist hotspot for cake and espresso, and the prices match the demand. We recommend taking a look around, then heading across the street to the more modern café, Hirado Kavezo, which serves a heartwarming cappuccino for half the price.

Surrounded by the Museum of Fine Arts and the Palace of Art, Heroes Square’ is a spacious public area next to City Park (Varosliget). At the center is the grand Millennium Monument, featuring a colonnade with statues symbolizing War, Peace, Work and Welfare, and Knowledge and Glory. See Big explain more, straight from the square:

It may sound like a kitschy Halloween attraction, but the     House of Terror is the real, terrifying deal. Previously the headquarters of the Nazi secret police, then Hungary’s communist secret police, this building holds the ghosts of countless atrocities. Several informative and interactive exhibits take you through the years and the lives of Hungarians under the Soviet regime, but it’s after entering an elevator that slowly leads you to the building’s innards that the terror truly sinks in. When the door opens, you’re led directly into the heart of the terror, including a water torture chamber, a tiny cell for solitary confinement, and an execution room fit with a noose—ominously swaying, of course. You’ll never quite be the same after visiting—and that’s exactly the point.

Step into the home of the world’s first rock star. This is where influential Hungarian composer Franz Liszt lived. It’s a small museum, but a fascinating one, too, with photographs, memorabilia, and (of course) Liszt’s pianos, and you’ll learn about his travels, his performances, and his ability to make women faint from admiration—Listzomania, indeed! If you’re not a fan of classical music, this may just change that. (Note: Beware of a (kind of) steep photography fee.)

Say hello to the Liszt statue awaiting you out front, then pop inside to take in the beautifully ornate architecture, the Greek fresco, and a sparkling bronze chandelier. For more of this type of design and architecture, head to the Alexandra Bookstore and its second-floor Book Café.

Make sure to do this in the evening, when Budapest shines in all directions (you can’t miss it—it’s that sparkling sphere hypnotizing you from all over town). The price is a bit hefty, but the 10-minute ride is romantic and intimate, giving you incredible 360 views of one of Europe’s most beautiful cities. (Note: As of this writing, the Sziget Eye is closed between January 3 and April 15.)

This may be one of Budapest’s most iconic symbols, a stately suspension bridge connecting Buda and Pest. Don’t miss the bridge’s guards: formidable stone lions which even survived WWII.

There are two main ways to climb the 170 meters to this UNESCO World Heritage site: From Adam Clark Square, hop onto the Sikló, a funicular railway originally built in 1870 (it was also destroyed in WWII), or simply walk up the Kiraly lipsco or “Royal Steps” (it’s not too bad of an ascent, we promise).

This World Heritage Site was home to both royalty (since the 13th century) and destruction. The Royal Palace was destroyed after being controlled by the Turks, rebuilt by the Habsburgs, and then ruined again in WWII. The Palace now houses the Budapest History Museum, the Hungarian National Gallery, and the Hungarian National Library. In general, it’s a beautiful area to walk around and enjoy spectacular views of both Buda and Pest.

The Neo-Gothic style Mathias Church, with its diamond-patterned tiles, is one of Buda’s most resplendent attractions. (Fascinating fact: It was actually turned into a mosque during the Turkish occupation.) It can be seen from many different angles throughout the city, while the nearby Fishermen’s Bastion towers majestically over the Danube, offering one of Budapest’s best (and most popular) viewpoints.

If you have time (we didn’t, but wish we did!), make a stop at Margaret Island, a leafy and popular recreation area in the middle of the Danube. Then, make it back to the riverfront in Pest and take a leisurely stroll toward your starting point, the Chain Bridge. We highly recommend this to be an evening activity. As mentioned in my intro, this city is one of Europe’s most beautiful—particularly at night, with Buda and Pest’s golden lights colliding and reflecting off the river. Along the way, spot the Olympic rings, take a tour around the stately Neo-Gothic House of Parliament, and check out nearby memorials to learn more about the 1956 Hungarian Revolution.

Yes, you were near here on Day 1, at Heroes’ Square. Now, venture inward and check out sites like the Time Wheel (essentially a giant hourglass—or “year”-glass to be more accurate), the Budapest Zoo and Botanical Garden, and the Vajdahunyad Castle, situated along the lake.

Bust out the bathing suit and dip into the healing waters of one of the biggest bath complexes in Europe. There are several other baths to visit in Budapest—of varying sizes, prices, and cleanliness—so it’s definitely worth researching more if you’d like a more traditional (or cheaper) experience. This one in particular has 18 indoor and outdoor pools, steam rooms, saunas, and massage and other wellness treatments. We stuck to the outdoor pools, and particularly enjoyed jumping into the whirlpool, which spins you around with water jets—seriously some of the best time you’ll have with strangers in swimsuits. You could easily spend all day here exploring the complex and simply soaking—you may need it after all that walking from Days 1 & 2. You can keep your belongings in lockers secured with your own wristband (similar to the Blue Lagoon).

This area is home to the Jewish quarter, and the Great Synagogue (the second largest in the world). It’s also the hottest spot in Budapest, with its thriving cultural and culinary scene. There’s an eclectic mix of restaurants—where you can get some of Europe’s finest cheap eats, from hummus to goulash—as well as interactive entertainment in the form of escape rooms (in which you actually pay to get locked into a cell?!).

Do not miss out on one of the area’s famous “ruin pubs,” large, funky, often multi-room bars built in the area’s abandoned buildings. It’s like jumping into a surreal bazaar, with odd antiques glued to the wall, flea-market furniture and empty bathtubs strewn about, creepy toys and teddy bears mingling on tables, and other sundry pieces of trashy art and zany treasures. Reasonably priced alcohol and an eccentric mix of live bands and DJs round out the ruin pub experience. We recommend getting lost in Szimpla Kert, one of the first and largest ruin pubs in Budapest, where you can even throw back a beer in an old Trabant (an East German-made car).

Now, book that trip and enjoy your time in Budapest! We sure did.
~Big & Small