VIDEO: Big & Small have discovered the best hike in northwestern Italy! The San Fruttuoso to Camogli hike is a challenging one, including lots of dizzying switchbacks, inclines and declines, and steep slopes that require steel chains to maneuver through. Click above to watch!

The Ligurian coast boasts some of the most scenic hiking trails in all of Italy, including the well-beaten paths that link up the enchanting five towns known collectively as Cinque Terre. While tourists swarm straight to Monterosso, Vernazza, Corniglia, Manarola, and Riomaggiore, those looking for a less-congested but just as spectacular walk should set their sights a little further northwest to take on the San Fruttuoso to Camogli hike.

Taking the Ferry from Genoa and Nervi

We were based in Genoa, the grand capital of Liguria, home to pesto, focaccia, Christopher Columbus, and Europe’s biggest historical center. From there, we first took a day trip to the seaside resort area of Nervi, where we walked along the Passeggiata Anita Garibaldi, a 2-km path along the water that features a number of rickety metal stairways that lead down to tiny beach areas and large, flat rocks meant for dedicated sun-worshippers. Nervi is a great day trip from Genoa, accessible via train or ferry. See more about Nervi in our video above!

Still, we wanted to get out on the Ligurian Sea and discover more of the region’s hidden treasures. Our main goal was to get to the former fishing village of Camogli, whose colorful stacked houses sit as sweet and pretty as any positioned in a Cinque Terre town—but, first, we wanted to hike. To do that, we headed to the tiny bay of San Fruttuoso, nestled between Camogli and the popular (ahem, overpriced and overtouristed) Portofino.

Getting to San Fruttuoso

Forget the car, the only ways to access San Fruttuoso is via ferry or foot. To get there, we took a 2pm ferry from Genoa’s Porto Antico (the old port) with Golfo Paradiso. The ferry service also stops at Nervi, so if you happen to be there, you can pick it up at Nervi’s main port as well. The entire trip from Genoa to San Fruttuoso costs 15 EU (about $16.65 USD) and takes roughly 1 hour and 20 minutes, with a quick stop in Camogli.

We figured out it’s most cost-effective to take the ferry the whole way to San Fruttuoso, then hike to Camogli, where we could catch a train back to Genoa. Of course, the ferry offers some beautiful views of the coastline, but, beware—it’s fast and furious. We both got a little seasick on our way there, so we were relieved to be back on solid ground.

Arriving in San Fruttuoso, you’ll first notice the sparkling turquoise waters, tiny pebble beach, and formidable 10th-century Benedictine monastery, the Abbey of San Fruttuoso of Capodimonte, towering above it all. There’s a small selection of bars and restaurants with tourist prices, so budget travelers will want to be prepared with extra water and food before arriving.

We got a quick espresso for a little boost before our hike and set off for the trail. I had read that there were two trails—an easier one that takes you inland, and a perilous one that lines the craggy coastline. We planned on taking the “easier” path, until, well, we couldn’t find it. Instead, we came across this sign:

Ready and willing to get going, we accepted this challenge and set off. Within the first 30 minutes, we crossed paths with a handful of hikers coming the other direction. Each had a slightly different opinion of the journey we had ahead, but all seemed to indicate it was going to be long—and tough.

From that point on, we saw no one. With cicadas providing the soundtrack, we zigzagged our way through the hills, climbing slowly up along relentless switchbacks. We captured quick shots of jagged cliffs rising above the blanket of blues, before heading into the depths of the forest.

As we approached the coastline again, we finally saw them: the steel chains we’d been warned about. These chains can be found strategically attached to the sloped edges of the cliffs. At first, we thought, no big deal, this is a cinch! But then the path grew narrower and rockier, and sloped ever steeper toward the sea.

Around every bend, we were hoping to see some signs of civilization, but then there would be another bend, and another set of chains. Finally, around the 3-hour mark, we caught a full view of Camogli and eventually came across a small collection of houses. A little further along, we ended up in the tiny area of San Rocco.

From here, we started to see a scattering of tourists, as the trail eventually turned into a paved path and then a long set of stairs heading down. Camogli—and a buttery piece of focaccia—was now easily within eyeshot. 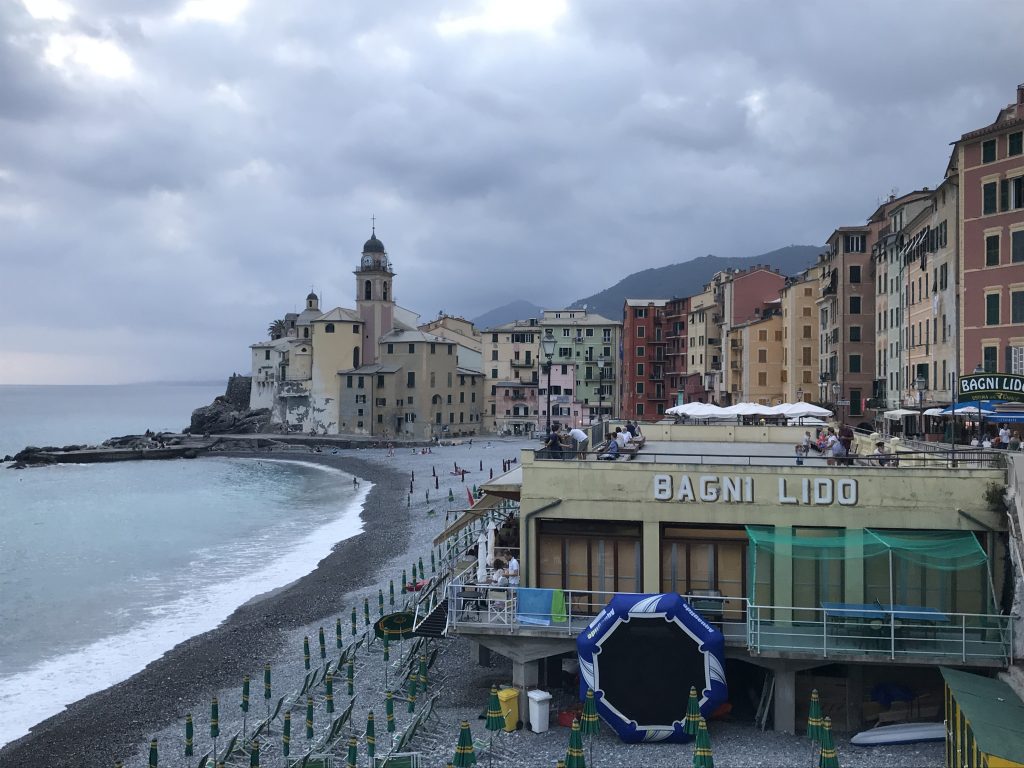 The whole hike from San Fruttuoso to Camogli is roughly 8.7 km and took us about 4 hours. We headed straight to Via Giuseppe Garibaldi, the lively road that lines the sea, to catch the sun setting at Bagni Lido, grab an aperitivo, and try out a fresh slice of focaccia al formaggio, the region’s famous bread stuffed and baked with stracchino cheese.

By 10pm, we had to catch the train back to Genoa. We wish we had more time to explore Camogli—it’s yet another charming Ligurian town that rivals the five among the Cinque Terre, or even the “Alternative Cinque Terre” (see video below!).

VIDEO: Big & Small explore six coastal villages along the Ligurian coast. This is our Alternative Cinque Terre (or rather Sei Terre, “six lands”). See the towns of Porto Venere, Lerici, San Terenzo, Levanto, Bonassola, and Framura. Click above to watch!

Liguria has several hiking paths that snake around its hills and coastline. The San Fruttuoso to Camogli one is our most recommended for seasoned hikers who want to get away from the crowds.

Here are some quick tips for getting the most out of your hiking trip in Liguria:

TAKE THE FERRY & TRAIN: To do this hike, we recommend taking the ferry from Genoa with Golfo Paradiso. See their schedule and current rates on their website (we paid 15 Euros for a one-way from Genoa Porto Antico to San Fruttuoso). We saved money (and escaped the crowds) by going straight to San Fruttuoso, hiking, and then taking the train back to Genoa from Camogli.

COME ALREADY FUELED & BRING SUPPLIES: Bring plenty of water (we recommend at least 2 liters per person), especially on a hot day. There’s no place to fill up on the path, until you get close to the finish line. Be prepared with a few snacks as well, and know that the options available in San Fruttuoso are extremely limited. (We couldn’t find any small store, only bars and restaurants.)

DRESS APPROPRIATELY: Wear sturdy shoes. You’ll be covering diverse terrain that includes jagged rocks, dirt paths, and slippery slopes. Dress in comfortable clothing, making sure nothing fits too loosely—you’ll see why this is important when maneuvering through those cliffs with the help of steel chains!

FOLLOW THE TRAIL MARKERS: This hike is well-marked. Just follow the two red dots, which come in especially handy in some of the rockier areas where the path blends in with everything else.

GIVE YOURSELF PLENTY OF TIME: We recommend planning for at least 4-5 hours on the trail. That includes time for breaks, picture-taking, and enjoying some nature and solitude.

STAY SAFE AND INSURED: When doing any sort of hiking, especially in a foreign country, it’s important to have a quality insurance plan. Big & Small recommend SafetyWing, which offers excellent travel medical insurance at an affordable price. This is a great option for nomads and both short- and long-term travelers.

It’s hard to pick the most breathtaking spot in a country full of them, but this is one part of Italy that will truly wow you into submission. On the coast of the Italian Riviera, in the Liguria region, Cinque Terre or “The Five Lands” comprises a quintet of quaint villages: Monterosso, Vernazza, Corniglia, Manarola, and Riomaggiore. The stunning and jaw-dropping architectural beauty of Cinque Terre was created over a millennium by farmers and residents. Houses and buildings rise sharply from the sea, as do intricate rows of grapevines.

Our home base while visiting Cinque Terre was in La Spezia, a mid-sized town just south of Riomaggiore. It’s a convenient and more affordable spot to stay when visiting the area, and has easy access to the train line that runs between the villages. It’s also a great base for a day trip to Pisa (just a 1-hour train ride) or even Florence (a little over 2 hours on the train). Each town has its unique flair: Be sure to purchase a hiking and train pass to make a stop at each. We recommend grabbing an espresso in Monterosso, sharing a pizza in Vernazza, slurping up a basil-olive oil gelato in Corniglia, digging into stuffed mussels in Manarola, and topping it all off with a glass of red in Riomaggiore. (Don’t worry, the steep, sometimes treacherous, hiking will burn it all off!)

Enjoy our photos and videos showcasing one of the world’s most charming corners.